SleepBiotic™ features a natural blend of prebiotic fibers (SunFiber®) with glycine and chamomile to support both optimal digestion and deep sleep.†

Research suggests that the compounds in SleepBiotic™ can improve gut and overall health. The benefits may include optimal digestion, increased metabolism, and deeper sleep.†

SleepBiotic™ features a natural blend of prebiotic fibers (SunFiber®) with glycine and chamomile to support both optimal digestion and deep sleep.†

Research suggests that the compounds in SleepBiotic™ can improve gut and overall health. The benefits may include optimal digestion, increased metabolism, and deeper sleep.†

Derived from the guar seed, Sunfiber®, a partially hydrolyzed guar gum, aids in digestive health. Sunfiber is one of the most extensively studied prebiotic fibers and helps support overall regularity, improves your glycemic index and improves overall gut health.

Milled in the United States, our banana flour is made from the pulp of unripe bananas before the sugar content has developed. Raw green banana flour is extremely nutrient dense: it’s high in potassium, vitamins, minerals, and resistant starch.

In clinical research, the essential amino acid, glycine, has been shown to have a calming effect on the brain as well as aiding in body temperature regulation, helping you fall asleep faster. To provide the maximum benefits, we formulated SleepBiotic with 2 grams of glycine.

German Chamomile is a popular herb known to ease anxiety and promote sleep. It has been used for hundreds of years as a natural remedy for helping people relax into a deep sleep and stay asleep longer.

For a great night of sleep mix with 4-6 oz water 1 hour before bed. Start by taking 1/2 scoop per day for 1 week then increase to 1 full scoop per day. 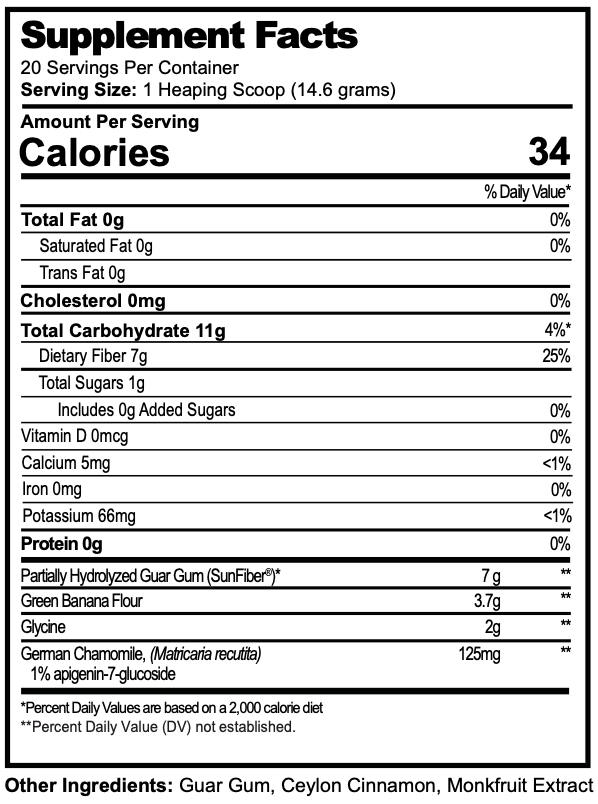 If for whatever reason you're unsatisfied with your Natural Stacks supplements, you can keep the full bottle on us and we'll refund your money. Anything after the first bottle, we'll ask that you return for a refund.