Creatine is best known for building muscle. BioCreatine not only builds muscle but improves mental energy and working memory!

Go through your day with sustained long last energy while quickly recovering from your workout.

BioCreatine is designed for optimal absorption to help you perform at your highest level.

Use BioCreatine to Perform your best inside and outside of the gym.

BioCreatine™ provides the proven mental and physical benefits of creatine monohydrate plus the unique advantages of Himalayan Pink Salt and Fenugreek Extract.

Research suggests that these compounds can help transport creatine into the brain and body without having to consume simple carbohydrates.

The benefits of BioCreatine™ include:

Designed for optimal absorption and performance, BioCreatine™ is the most effective creatine supplement on the market.

Himalayan Pink Salt is included in BioCreatine™ to optimize sodium levels for maximum creatine uptake. Fenugreek extract is added to enhance creatine’s absorption, comparable to rates studied when creatine is co-ingested with a simple carbohydrate source.

It acts like a battery by storing ATP (adenosine triphosphate) that the cells can use as fuel at any time. [2] Creatine supplementation increases the size of your battery so that you can sustain long-lasting mental energy or quickly recover from a workout.

In its natural state creatine can be found in foods like beef and pork, although most of it gets broken down during cooking.

A double-blind, placebo-controlled, crossover trial on 45 young adults found that “Creatine supplementation had a significant positive effect on both working memory and intelligence, both tasks that require speed of processing”. [16]

An extensive rodent study conducted by 20 German scientists was published in the Neurobiology of Aging Journal in 2008. It concluded that “Creatine may be a promising food supplement to promote healthy human aging”. [18]

Himalayan Pink Salt (sodium chloride + trace minerals)
Creatine and sodium are “co-transporters”, meaning that creatine absorption is dependent on having adequate levels of sodium. [19-21] However people typically take creatine after working out when their body’s sodium levels are severely depleted (caused by sweating and electrolyte dilution from drinking a lot of water).

Regarded as the highest quality and most nutrient-dense source of sodium on the planet, Himalayan Pink Salt contains more than 84 trace minerals and key electrolytes for optimal health and hydration.

When studying creatine uptake in skeletal muscle, researchers at the University of Missouri found that “the primary means to add creatine to muscle is uptake of creatine through the sodium-dependent creatine transporter.” [23]

Fenugreek Seed Extract
In the mid-1990's it was discovered that creatine's muscle absorption could be significantly increased with high-glycemic carbohydrates (by simulating an insulin response). [25-29] Insulin assists in the transport of creatine and other nutrients into muscle cells. This is why most commercially available creatine products include sugar or some other form of carbohydrates.

Fenugreek Extract naturally activates the insulin receptor [30, 31], creating an effective way to improve creatine absorption without without having to consume carbohydrates. In fact research has shown that creatine + fenugreek is just as effective as creatine + carbohydrates. [32]

In a 2011 study on 47 men scientists found that “ingesting fenugreek in combination with creatine monohydrate may be an effective strategy for improving creatine uptake similarly to dextrose without having to ingest large amount of simple carbohydrates.” They also discovered “significant increases in bench press 1 rep max and lean mass”. [36]

Published in the International Journal of Sport Nutrition, a study conducted on 30 college-age men found that “500 mg of daily (fenugreek) supplementation significantly affected percent body fat, total testosterone, and bioavailable testosterone compared with a placebo in a double-blind fashion.” [37]

When studying the effect of fenugreek seed extract on endurance capacity in mice, Japanese researchers suggested that “improvement in swimming endurance by the administration of fenugreek is caused by the increase in utilization of fatty acids as an energy source” [38]

Awesome product use it daily.

I've been SEARCHING for BCAAs that aren't some fake, fruity powder I have to chug down in a glass of water. Encapsulated BCAA powder from a traceable, natural source, is literally everything I was looking for in a product. I will be purchasing these for as long as they're around!

The Perfect Product for Me!

This will be the first time I have tried supplements and so far, it’s going great! I feel like I am starting to see changes and great ones too!

Awesome if you are working out

Creatine and sodium are “co-transporters” which means that creatine absorption is dependent on having adequate levels of sodium. Himalayan Pink Salt is the highest quality and most nutrient-dense source of sodium on the planet. Hand-mined from deep in the Himalayan Mountains, this pristine salt contains more than 84 trace minerals and key electrolytes for optimal hydration. 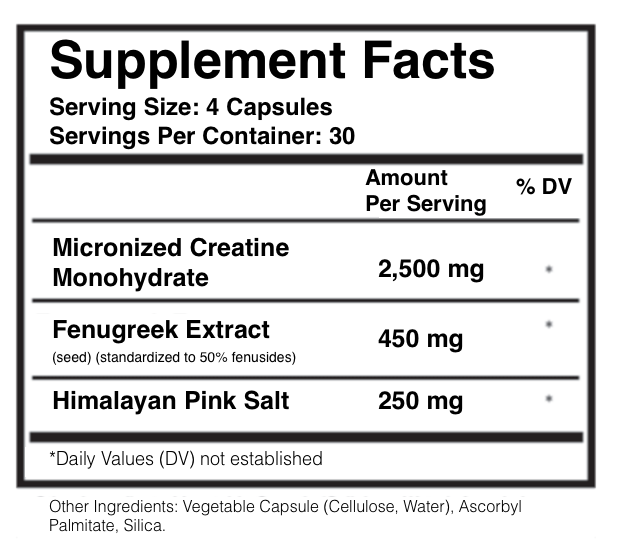 Giving me the GO!

I feel ready for any activity

Loading...
Was this helpful?
JR
Jason R. Reviewed by Jason R., from United States
Verified Buyer
I recommend this product
My Age
35 - 44
Rated 5 out of 5

Within the first week, I noticed a much-improved effect using Natural Stacks BioCreatine versus other brands creatine monohydrate!

Loading...
Was this helpful?
LB
Leroy B. Reviewed by Leroy B.
Verified Buyer
I recommend this product
Rated 5 out of 5

Truly great products. I'VE been using it now for a couple of months and I feel great. strongly recommend this product.

Loading...
Was this helpful?
AL
Andrew L. Reviewed by Andrew L.
Verified Buyer
I recommend this product
Rated 5 out of 5

Loading...
Was this helpful?
CF
Callan F. Reviewed by Callan F., from United States
Verified Buyer
I recommend this product
My Age
25 - 34
Rated 5 out of 5

Endurance is off the charts

Bio-creatine is an amazing product! I take 4 before heading to a hard interval workout. I feel like I always have 25% more capacity when I take this product.